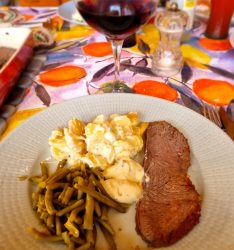 This was a week that started slow but then ended really fast. After work I picked up some groceries on my way home and made a steak with gratin for dinner. Served with a glas of nice red (for me) – sodas for the rest.

Now we are crashed in our corners watching a new movie on Netflix called “The gray man” with Ryan Gosling among others. On IMDB you can read “When the CIA’s most skilled operative-whose true identity is known to none-accidentally uncovers dark agency secrets, a psychopathic former colleague puts a bounty on his head, setting off a global manhunt by international assassins.” Let’s see if we like it.