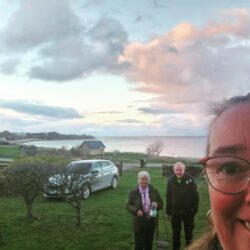 We got up early this morning to get on the road as soon as possible since it gets so very dark in the afternoon now. After breakfast we finished up, said good bye to my uncle and started the long drive back to the real world. My second-cousin says the real world is down here though – she might be right.

No traffic hardly all day – some closer to Stockholm but not too bad, mixed weather – both sun, rain and even some snow. We took some nice breaks, switched driver a few times and arrived safely back home  about 6,5 later.

So nice to hug my boys again – I have missed them but I know they have been ok here so I haven’t been worried. My hubby had bought things for dinner so I prepared it and we could sit down together and catch up while eating. Lovely.